Aurelia with her floral headwear after going for a swim.
Anna Morrell, 46, and her daughter Aurelia, 10, go for a swim in All Hallows beach which is on the opposite bank of the Thames Estuary from Southend. They were joined by their friend Zoie Pritchard who decided not to swim because it was too cold and blustery.

Morrell is a member of the Outdoors Swimming Society which is promoting “The Longest Swim on the Longest Day” on June 21 which encourages people to go for a long swim and swim in general on the longest day of the year. Anna Morrell has been with the society for a decade and writes and edits their newsletter.

Anna Morrell enjoys swimming and has been doing it since she was 3 years old. The beach on All Hallows is one of her favourite locations but also enjoys swimming in the Women’s Pond in Hampstead Heath.

Morrell’s daughter Aurelia has been swimming since she was 1 years old. Aurelia found the weather and water on the June 19 evening too cold and windy and did not swim for too long. Morrell went for a swim. Morrell does not enjoy doing too long of a distance but enjoys swimming as long as possible.

Morrell suffers from Lipoedema. Lipoedema is an abnormal build-up of fat in your legs and sometimes arms. It can be painful and affect daily life, but there are things you can do that may help. The condition limits how long she can swim before she becomes tired. Morrell swims close to shore and usually with friends in case she gets into difficulty because of her condition.

Morrell wore a flower wreath on her head to celebrate the summer solstice, while she was swimming.

Morrell swam for about 15 minutes before it got to cold even for her who is a hardy swimmer. 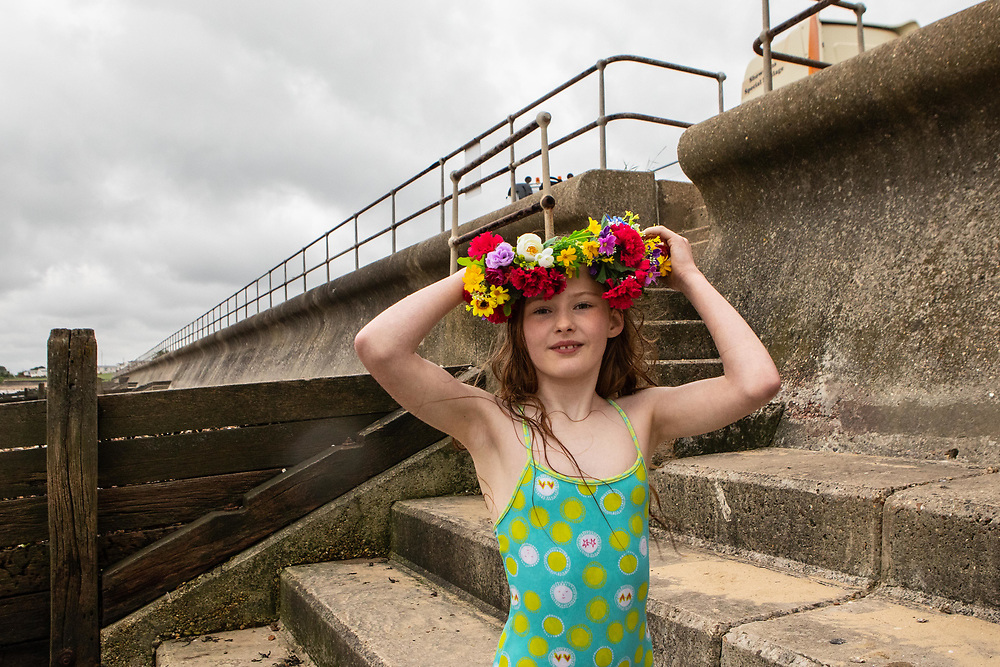